As a landlubber here in Pennsylvania, my experiences with boats have been few and far between. I could probably count on one hand the number of times I have ben on a boat. There was the inflatable raft I bought at Kmart as a teenager to float down a local creek for a scene in a super-8 film project. That excursion lasted a few hundred feet at most. A charter fishing trip on Lake Erie, a couple of trips on river boats for wedding and Christmas parties, and a few ill attempts at canoeing round out the rest of the moments.

I have yet to be on a boat or ship on the open sea though. I am not sure if I would enjoy that or not. Lake Erie was rough enough at times so it would have to be a really big boat for me to even consider such a thing. Recently I drove behind a beautiful Beneteau Oceanus 55 yacht as it was being transported through my local town to detour around some highway construction. It was impressively large looking on the trailer traveling through city streets but I imagine not so much out on the open water. But if the opportunity arose where I could travel aboard one I think I would have a hard time turning that down!

Yet I still am fascinated by the nautical thing. There is something about harbors and marinas I find intriguing. The boats, the ropes, the gulls, the sounds, the smells – they all fill the senses with a unique quality that I just don’t feel in my wooded surrounds. And the people always seem so happy. They could spend all day rigging, or whatever is they fiddle with at the docks, and just smile all day and are happy to stop and chat to whoever walks by. Maybe that’s what I like the best.

Here’s a few scenes I shot while in Charleston, South Carolina 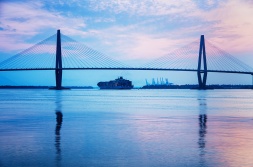 4 thoughts on “A boating life”