Here’s (over)looking at you, Wheeling

The last time I visited Mount Wood Overlook in Wheeling, WV was in 2011 in the middle of my 365 photo project. I was working in the area at the time and during a rainy day break from work I remembered the overlook from visiting in my teenage years back in the early 80’s and wondered what it looked like. I didn’t have too much of a memory of the site from my youthful visits but it all came back when I parked in the “lot”, which is really like a paved entrance off the public road. How we even found this spot when we were young is beyond me. It’s not in any convenient location, not off a main road or near anything or anywhere we would normally travel to and it’s over 30 miles from where we lived. I guess someone heard about it from someone else and thought it was a worthwhile spot to check out. Huh, imagine that, in the pre-social media days we were able to find out-of-the-way places just by talking to one another. 😉

When I was there in 2011 I knew I wanted to visit the place again when I had a wider angle lens to better capture the structure. As soon as I purchased my Vivitar 13mm I knew I wanted to re-visit the overlook and see if my wide-angle visions were correct. I wanted to go on a cloudy day with muted light to avoid shadows since I was thinking black and white to focus on the structure and when my wife and I started the 30 mile trip down the highway we had just that, nice dark clouds. Unfortunately the clouds got darker and darker on the way eventually turning into a heavy thunderstorm. Besides making for a not fun highway drive I feared the storm would clear up just as we got there and the sun would come blazing out. Sure enough, that’s what happened.

So the light wasn’t quite what I had in mind but at least is was warm afternoon light. But the structure was still intact as I remembered but with some new, colorful graffiti. The graffiti was even more elaborate than my last visit and prompted me to think in color and to us the graffiti as part of my compositions. That also meant I didn’t focus as much on the structure as I originally had planned. I did think a few of the shots still worked better in black and white so I mixed them in.

The light didn’t turn out like I hoped but it wasn’t a total wash. I got a few good photos of the overlook and the old cemetery across the street was worth an exploration also. I took a few shots there on this outing but I’ll have to visit the cemetery on a gloomier day. 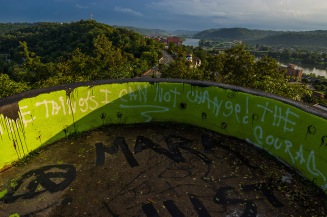 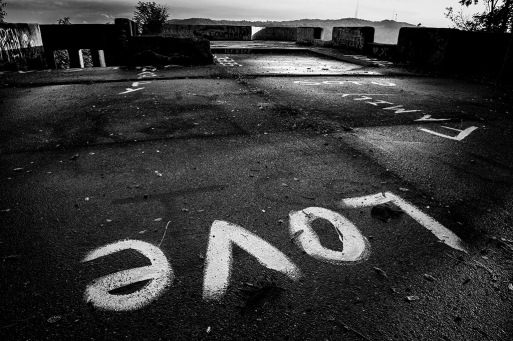 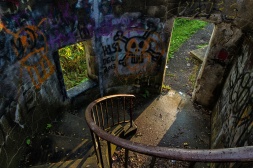 Local newscast on the site.